Making proteins is a slow process 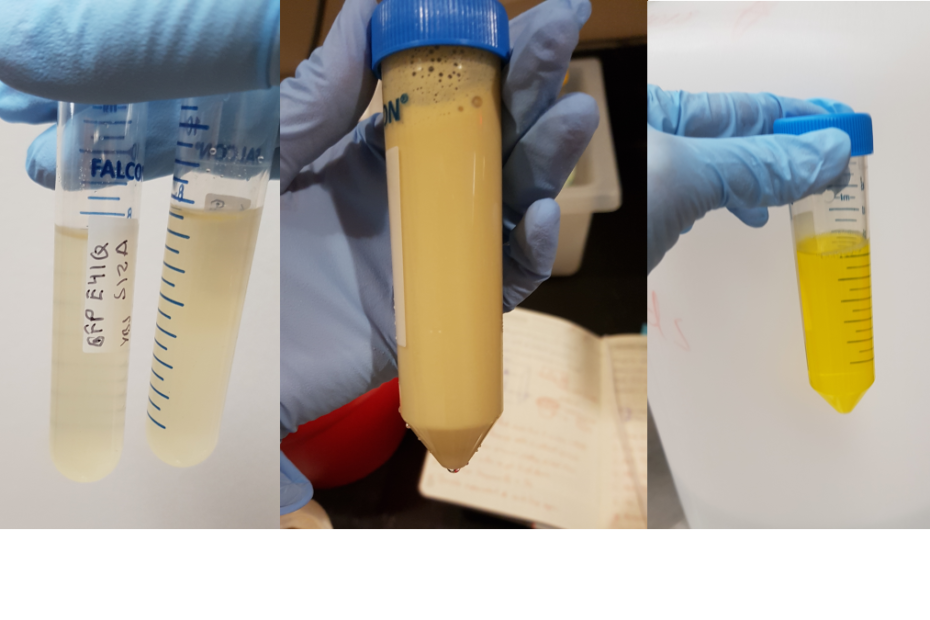 I have been going through a protein expression and purification bootcamp, courtesy the graduate students in our lab. This is a hands-on experience, starting from the process of making growth media all the way to having a purified protein. Apart from the practical skills I also learnt that this process needs patience and something to do while waiting for the cells to grow.

Before cells can be grown, there has to be something for them to grow in, i.e growth media. The media is made of a factory-made broth powder, mixed with glycerol and water. To make sure there is no bacterial growth, the mixture is autoclaved before adding the starter culture, which are cells that have started to grow in a smaller volume sSee left pane of image above).

Once the growth media has been autoclaved and cooled down, the starter culture can be added to it, with additional antibiotics to prevent bacterial growth. And then the mixture needs to be shaken at a constant temperature until the cells have replicated to the desired amount, which in my case takes almost exactly 3 hours.

Once the cell concentration has reached a certain amount (checked by measuring absorbance with a UV-Vis spectrometer at 600nm) an inducer is added to start protein expression. Once it has been added, there isn’t much to do except waiting for the shaker to do its job, overnight. The next morning the liquid is centrifuged and the supernatant is poured out. The remaining pellet is scraped into tubes and dispersed in buffer or frozen (center image above). At this stage I really get to see that I have my proteins, because the pellet is bright yellow-green, and under UV light it becomes really green! In this form the cells and the proteins can survive for a long time, as long as it’s frozen.

After the pellet has been redissolved in buffer it goes through a homogenizer that efficiently breaks the cell walls so the proteins can be extracted. The solution is centrifuged and the supernatant is poured onto a HIS-tag column. Only proteins with a HIS-tag sticks to the columns while everything else goes through. Once the protein has been eluted (right pane above) another step is added – the FPLC. And after that the protein is concentrated and stored. Although it sounds pretty easy it is time-consuming work.

But this is a summary of the steps involved. Added to this are mutations of the proteins, which is another week of work before even starting to make the growth media. So to create my own proteins and purify them, it would take around two weeks. Nice to know, and now I know how to do it on my own!